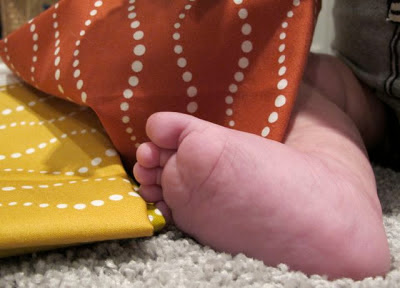 This is a story about a dog, a vacuum, and a toe.

The Damn Brown Dog, Maple, was the first thing Hubby and I ever got together. Before joint bank accounts, before fights over counter space in the bathroom, before major purchases, before kids. Before all that we got a dog. She was my first dog ever, and Hubby's fourth or fifth. We'd been talking about it, but always assumed we'd wait until we lived together.

Her presence in our lives was, in part, motivated by the brazen bottle pickers who would come in our yard, and practically in the house, to score. Living by the University meant a lot of bottles and a lot of bottle pickers. From day one she was a total spaz and a wannabe lap dog. Her ears were the softest things ever and flopped down in defiance to her German Shepherd heritage. She was whipsmart - the smartest dog Hubby ever owned.

For over 13 years she was constantly underfoot, devoted to us. A once proud swimmer, her hips were going. And with that went incontinence, senility, and her sight. After a rough Christmas season we made the tough decision to put her down on New Year's Eve. Between then and now we had vacation and the normal chaos of life. That means we are now starting to feel the effects of her absence. 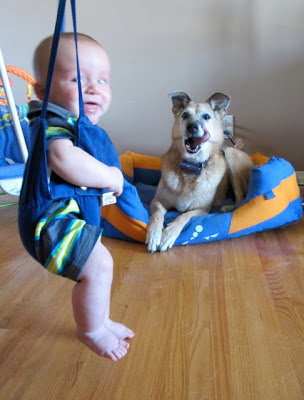 As any dog (or cat owner) knows, the worst part about them is the blessed hair everywhere. Everywhere. Maple was blessed with a double coat. Which meant I was blessed with the task of vacuuming at least every second day. And if I didn't vacuum we were all blessed with a skim coat of hair on every inch of our existence.

After the dog, our vacuum was one of our first new purchases as a couple. We'd bought a used car, the house we bought was 50 years old, and our furniture was a mishmash of hand-me-downs. I had to go to California for work so Hubby tagged along. We had two free days at the end of the trip. One day we spent surfing. One day we spent driving around the San Diego area looking for a vacuum. We sure know how to rock an vacation.

Dysons weren't available in Canada then. Hubby was sucked in by the design and the story, and the promise of suction. That's why we devoted the expense and the time to seek one out. We eventually found one (everyone was out of stock) at a dingy store in the almost wrong side of town. We were trying to fit it in our rental car and not watch the drug deal going on a few spots over in the parking lot at the same time. But we got it home and it felt like the angels were singing when I swooped it over our hardwood and the hair disappeared. That vacuum has been an almost as faithful companion as Maple.

I'll be totally honest here, since Maple died I've been quite relieved to not have to vacuum three times a week. So relieved that I barely vacuum at all! Just the kitchen and around the table to clean up the crumbs. Good enough, I thought.

The Garbage Truck, A.K.A Baby Boy, is crawling commando style all over the place. With hardwood upstairs we've been keeping him sockless at home so he has better traction. Well, the other night we had a ridiculously rough night with him. Since he's been sleeping through the night for a few months now it was brutal and we couldn't figure out what was wrong. Not teething, no tummy issues, no fever,  nothing. It wasn't until I was getting him dressed in the morning that I noticed it.

It being a toe twice the size it should be and seemingly attached to the one next to it. Close inspection revealed a mass of lint and hair wound tightly around his toes. So tightly that it was like a tourniquet, cutting off circulation and slicing a ring around his toe. I had to soak it and use my small applique scissors to free his toe. And we continue to soak it, keep it wrapped, and clean it constantly as it slowly heals to avoid an infection.

So vacuum, you are becoming my new best friend again. Even without your inspiration, Maple, you are still needed and loved. For the sake of our toes. 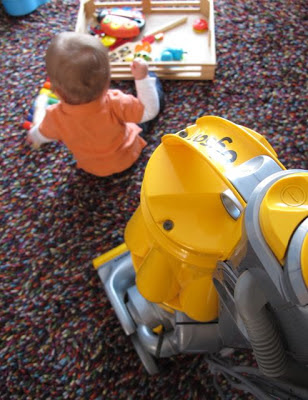 Your poor little guy! I'd so much rather sew than clean!

Ooh, poor baby! And sorry to hear about your pup - she sounds wonderful and it's always tough to lose a member of your family.

Oh gosh! Poor little man. I read a story about this happening in the paper a few months ago - it was basically a warning to parents, especially women with blonde hair! Before that I never would have thought something like this could happen. I hope he's ok!

Poor little N. We have friends in the same boat as you were. It is always tough to let go of the things we love the most. RIP Maple

I love my Dyson. Your little boy is SO cute!

I totally get the vacuum love and hair dogs having an 11-yo German Shepard. Sorry to hear about your faithful pup, it is hard to let them go.

I am so glad that you have fixed the toe and that your vacuum is going strong. I am so sorry to hear about the loss of Maple, she sounds like she was a wonderful pet.

Maple's memories will be cherish-able forever and now we know about the toe and something to watch for-first I'd heard of it.

Maple sounded like a wonderful companion. We have a 15 year old Pug who's lost his eye sight, his legs spaz out on him and and is sometimes incontinent as well. As long as he's not in pain, the tail keeps waggling and he has that goofy smile on his face, we'll take it one day at a time.

On another note, I HATE Dyson vacuum cleaners!! We have one and I can't stand it, it's heavy, ungainly and the cord isn't very long. The attachments keep falling off -- it's a canister vac. On the other hand, we have a 12 year old Miele which is amazing. Suction has never been a problem, it's light, easy to move around and the cord is LONG! We also have a robotic vacuum we run every other day, Pugs shed a lot!!

Within A Quarter Inch said...

Oh wow - my worst nightmare became your reality! That's awful! When my twins were first born, I spent a lot of time inspecting tiny toes because I had read somewhere that hair could get tangled up and make then lose circulation... you gotta obsess over something, right? I am so glad everything is healing properly and thank goodness for applique scissors!!

So sorry about Maple. We had a German Shepard before we had a baby too. He was smart and sweet but he did try to sit on my lap every night. Only me, no one else. He was very light. just a black saddle and our carpet was brown. I understand about the vacuum. I think we broke like three of them one year with the dog hair.
Glad you were able to take care of those tiny toes.

I am so sorry for your loss Cheryl. I know how it is having to send your furry love off for the "big sleep" as my husband calls it. We said the final goodbye to Obake, our chow-mutt companion of 15 years, not quite two months ago. She, too, was much like your Maple - lame, incontinent, and partially blind - but very much loved. She was with us, like y'all, before kids. She is THE reason we bought a Dyson. She was our only dog. We cried like crazy that Saturday afternoon. I cried this morning when I read your story. For you. And for my Bake-y.

Wow. What a story. Glad baby boy is ok. It's always tough to let go of a beloved pet.

Sorry about Maple. It is a hard decision to make. Glad your little man is okay

Did you know you can shorten your long links with LinkShrink and make money from every visitor to your short links.

Using RentalCars you can find the most affordable car hire at over 49000 locations globally.