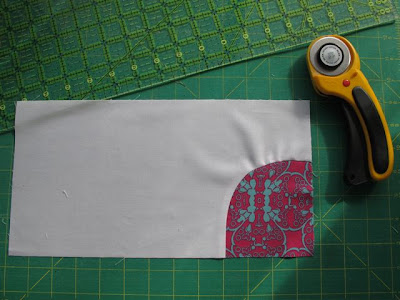 This week I'm playing with the charm pack of Cosmic Burst by Mark Cesarik.
Inspired by my improv curves on the bee blocks, I decided to make some Drunkard's Path inspired blocks.
I started with a rectangle of plain white (Kona White) cut to roughly 13'' by 7''. My hope was to trim the blocks down to 12.5'' by 6.5'' when I was done. I placed the charm over one corner and freehand cut a quarter circle through both the charm and the white. Remove the white fabric and sew the charm into the gap. Press towards the white and trim the block to size.
It all went surprisingly quickly. And easily. And it was the exact kind of block I wanted to make.
I alternated which corners I sewed the charm into. Just for fun. 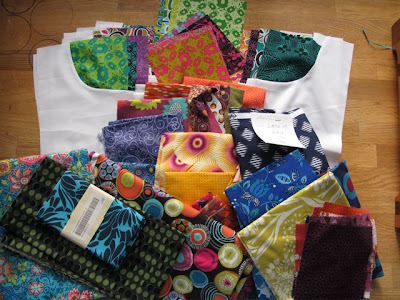 When I started I had no clue what kind of final design I would end up doing. After I'd made about half the blocks I did some sketching. I learned two things:
1. For most of the designs I was sketching I could have put all the charms in the same corner. Oh well.
2. To make anything but a baby quilt I needed to make more blocks.
That meant I went shopping in my stash. Turns out I don't have a lot of the bright florals that we've been seeing for years. I could think of tonnes of fabrics I've seen that would work really well with Cosmic Burst, like anything from Jennifer Paganelli, Amy Butler, Tula Pink, and Kaffe Fassett. The colours are quite rich so they wanted to play well with Lizzy House and Kate Spain. But it seems I haven't stashed much of those fabrics! Hmm...
But I did have a charm pack of Lizzy House's Outfoxed which has some deep colours and then dug through all my fabrics for perhaps some unconventional matches. But once I cut charms I could see that Cosmic Burst was going to play well with lots of different friends.
Oh, and once I got all the blocks done my Hubby asked me to make a baby quilt for a friend of his and could I please use these blocks. So it looks like there will be two baby quilts out of this week of play, instead of the lap quilt I'd planned.
Tomorrow I'll show you some of the layout options for these blocks.
(Cosmic Burst ships in April)
Posted by Cheryl Arkison at 7:07 AM

I wish I had an ounce of your "fly by the seat of your pants." The risks you take are inspiring to me.

Those Cosmic Burst fabrics are fantastic - glad you're getting a chance to play with them!