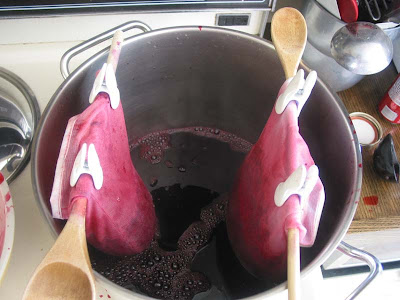 Inspired by the look of the jellybags when I made black currant juice I decided to try some natural dyeing the other day. I saw this post on Crafting a Green World ages ago, so I had some direction. 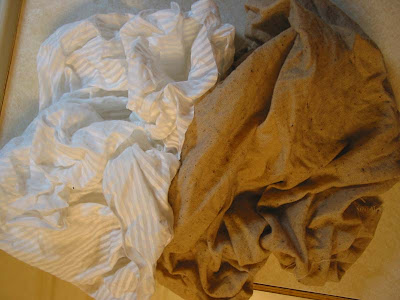 I chose two different fabrics to see how each would take the dye. The one on the left is a traditional white on white and the one on the right an unbleached thick muslin. I first simmered them in a mixture of 8 cups water with 1/2 cup salt for an hour. I only had kosher salt and fleur de sel in the house, so kosher salt it was. The salt is supposed to act as a mordant, encouraging the dye from the juice to stay on the fabric. While that was simmering I took the mash (the berries) from the blackcurrant juice making and simmered that in some more water. Sorry, but I wasn't wasting (as I saw it) the blackcurrant juice on this experiment. 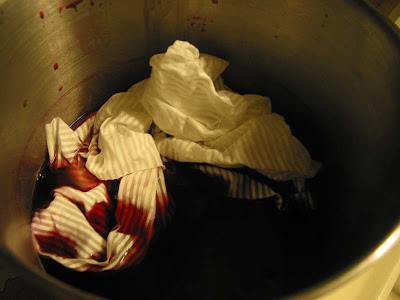 Here is the fabric just as I immersed it in the dye. I simmered the fabric for another hour on the stove. Then I shut it off and let it sit overnight. 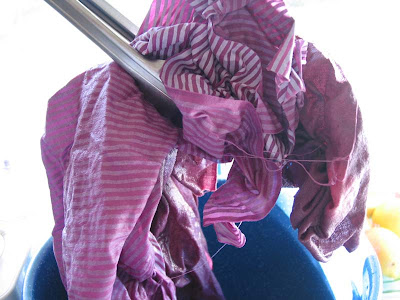 Don't you love the colour? Here is the fabric in the morning, just as I took it out of the dye. 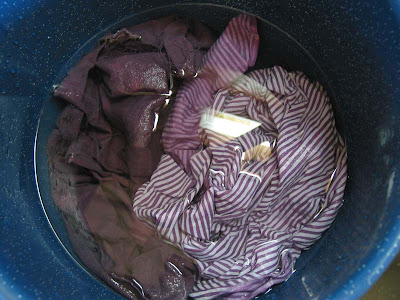 And here it is after a couple of rinses. The running subsided, but it was still running so I added some white vinegar to help set the colour. Unfortunately, that seemed to encourage more running... So I gave it one more rinse and put it outside to dry. 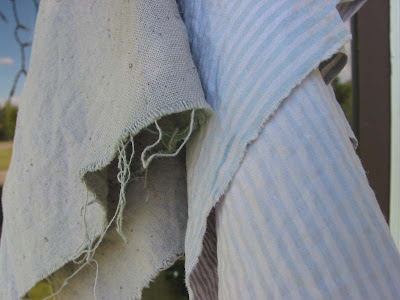 This is the end result. More grey/mauve than purple. I would hesitate to put this in a quilt that is going to be washed, but it is still pretty enough to be used in a wall hanging
If I was willing to try some non-toxic methods for dying I've had great results with the Procion dyes, but this was an experiment with non-toxic, natural dyes. I've done a bit more research since then and it seems that cottons are the worst at taking on natural dyes without a good mordant. But most of the literature seems to recommend using alum or other heavy metals as a mordant. Alum arguably non-toxic, but it isn't a gaurantee.
I am going to try some more natural dyes - nanking cherries, turmeric, and maybe some beets and onion skins. I'll keep you posted.
Posted by Cheryl Arkison at 8:12 AM

Labels: dyeing, green is not just a colour

it's interesting to read about this...something that I have often wanted to try...but don't want my husband to abandon me forever....so I'll just stick with my fabric buying addiction to keep things peaceful at home. I look forward to reading more about your adventures of fabric dying.

Can I link this in the Carnival of Green Crafts on Thursday? Let me know!

p.s. Sorry about the insomnia. That stinks, I've been there.