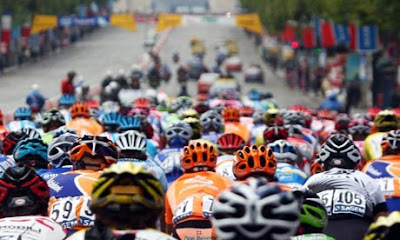 (image from The Guardian)

Confession: I still watch The Tour De France and I still love it.

Yes, I know about all the doping and the disgrace of many of the sports' stars. Yes, I know that nearly every rider plays that same game. But I can't help myself. I get sucked in by those helicopter images, the frenzy of the crowds on the mountain stages, the banter between Paul Sherwen and Phil Liggeett, Bobke, and sheer strain on the cyclists. Doping or not, those guys are still working their muscular butts off.

I can also remember what quilts I was working on every year during Le Tour. Which ones I basted while we watched, which ones were under debate as the mountain stages loomed. Talk about memory by association!


So, every year, come July, my Hubby and I settle in for 21 nights to watch Le Tour. It's usually hot out so we drink beer and chat throughout the 3 or so hours we watch. It is about the only TV we agree on. And in July we probably talk about life more than at any other point in the year, because we are sitting together. I love it all.

Posted by Cheryl Arkison at 7:40 AM

I love it too, Cheryl! In fact, I'm watching right now and knitting socks!

Big fans too. The TV turns on a few minutes before 8pm each night. We have been known to go to sports bar/restaurants to get our fix when we are away from home and do not have access to cable. In fact, the Tour is the main reason we have cable at our house. I am enjoying the post-Lance years even more. I have a libertarian view on doping, they are big boys, and feel the problem is more with the governing body of cycling so that issue isn't such a big deal with me. It was nice to see the French get their big day yesterday.

I love watching it too. Although the images can be a bit terrifying - watching them all clustered together flying down the hills.

The Portland Art Museum has a great bike exhibit right now. The image you used reminds me of the art piece they have on the outside of the building that is made out of helmets. Here is a photo of it.

I am the same way with association! I can sit under a quilt and see the show! One quilt I bound while watching Rocky (2, and 3 and 4 LOL) it wad because of who I was making it for. Now when I see the show I think about the quilt!

Still a big fan, especially now with an Aussie team, Green Edge. Year after year I have stayed up till the early hours to watch this spectical, but this year I have had to rely on the updates. I think I'm getting too stay up soooo late and still function the next day. Go Green Edge.

What a great shot! I thought it was scraps before i clicked on it.
I see a quilt in there for sure!

I read your blog entry aloud to my husband; it is the same every year in our home as we hunker down during Le Tour. I finish up bindings or knit while we enjoy the boys on the bikes. Thanks for a great post.

We love it too! But because we're in Australia, we are sitting up late at night watching it and we're in front of a roaring fire! I love the commentary, the learning about France, the countryside and watching Aussies do well.

I love it too! It's perfect to have on while crafting I find! Bonus of this year is how well the Aussies are doing!

We love it too! Today was an exciting finish ... hope you get a chance to see it in Nanaimo! - Paula

I haven't watched the Tour in a couple years, but it used to be one of my favorite things to do with Barry. Here, we'd get up really early and ride our bikes to a little French bakery that played it on a big screen. Lots of people showed up for it, drinking coffee, eating pastries, and cheering. Sounds like you guys have some nice Tour rituals, too.

Sounds a lot like us, although not this year. I remember watching the year our house was all torn up so we could re-do the kitchen.

This was my 9th TDF. I try to not schedule anything for the month of July so I can focus on the tour. I have even made a couple of quilted pieces as my salute to the tour! One is made from TDF t-shirts I bought from e-bay and the other piece is for one of my favorite riders - Thor Hushovd - for his green jersey win in 2009. Since last year Peter Sagan is now my man!