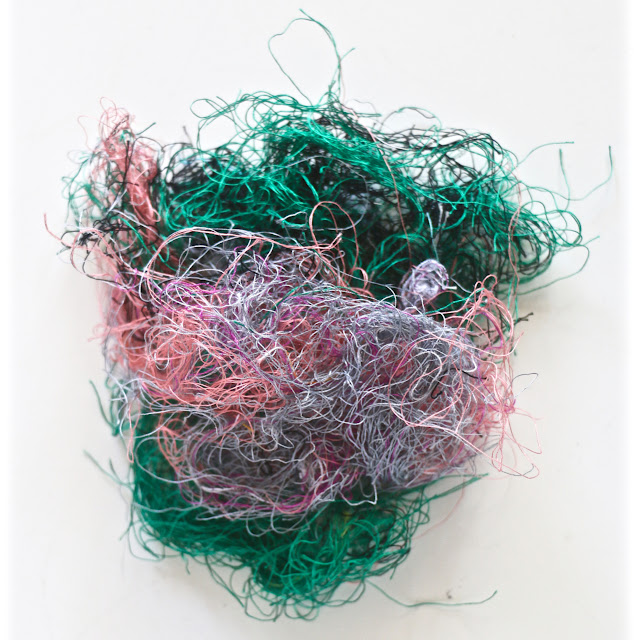 You might see an ugly mess of threads here. Frankly, that is what it is. But this mess of threads represents hours of work. Not work that I tore out in disgust or because of a mistake. Work that I intentionally put in then pulled out at the end of the process.

These are basting threads.

When I started sewing of any kind I, like many others, eschewed basting as a waste of time. Why baste if I can just pin and sew it? I thought basting was just an extra step that slowed down the entire process. And basting while quilting? Now that was just getting downright ridiculous.

Then I was proven wrong.

Basting is an absolutely integral part of hard appliqué. Taking the time to baste and baste properly makes a huge difference to your project - from process to finished project. A few months ago I was teaching a hand appliqué class and I had a student there for a refresher and simply because she loved the pattern. She was not inclined to want to baste like I was suggested but I encouraged her to at least try it for the class. If she hated it then she never had to do to again. By the end of the class, like me, she was a complete convert to a more detailed and time consuming baste. Neither of us are going back to the old way and here's why:

1. Basting holds everything in place so you don't have to worry about anything moving as you stitch. Your appliqué gets moved, manipulated, scrunched up, folded, and otherwise manhandled as you sew. If you aren't properly basted to start the appliqué won't stay where you want it to.

2. Because of the above, pins won't cut it. You can buy pretty little appliqué pins. They are usually shorter in length and with a small head. Super cute, but best used for holding your appliqué in place while you baste. All that handling of the block means a lot of pin pricks if you only use pins.

3. A few stitches to simply hold the appliqué in place doesn't cut it. That's because the appliqué will move along the edges ever so slightly as you sew. If you've only basted in the centre of the appliqué that means the appliqué rotates. In other words, it isn't staying where you want it to stay. 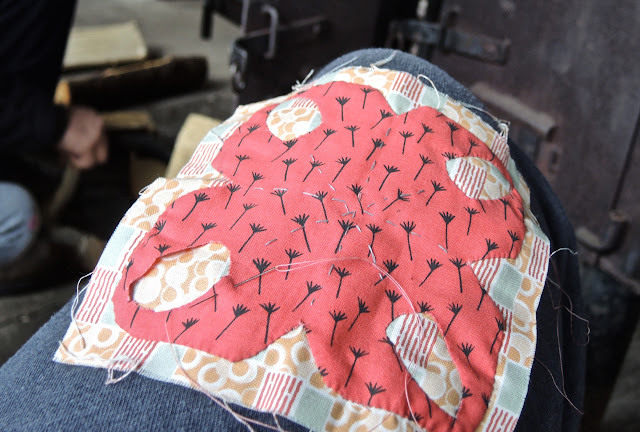 (Lesson learned on my Alturas blocks, they were always a little askew. Don't chintz out on basting.)

4. Baste on a flat surface, like a table, not in your hands or on your lap. This keeps the pin pricks to a minimum. It also makes it much easier to hold your basting threads in order.

5. Use old thread or bobbins that need to be emptied but you don't want to waste the thread. As long as it is not heavier than a 40W thread (the smaller the number, the thicker the thread, the bigger the holes left behind.)

6. Use a regular sewing needle, but not a huge one. I don't think it is necessary to use the tiny appliqué needles, but you could. But this is not the time to use a big embroidery needle just because that is what you can find. A Universal hand sewing needle is just fine. Again, the bigger the needle, the bigger the hole it leaves behind.

7. Double up your thread. I know, this makes it thicker. When you double up the thread you don't have to worry about constantly pulling your thread through the eye of the needle. If you are comfortable with a single strand, then go for it. I prefer to have it doubled up because that is easier for me.

8. Do not knot your basting thread. Just hold on to the first couple of stitches you make then they will be fine. Start from the back and do not pull all the way through, leave a tail about 1/2'' long to hold on to.

9. Use a running stitch to baste. Not a small stitch, but not huge either. So a simple up and down with your needle through both the background and the appliqué. If you are listening and doing this on a table top you can even turn that into a bit of a rocking stitch, taking 2-4 stitches at a time before pulling your thread. 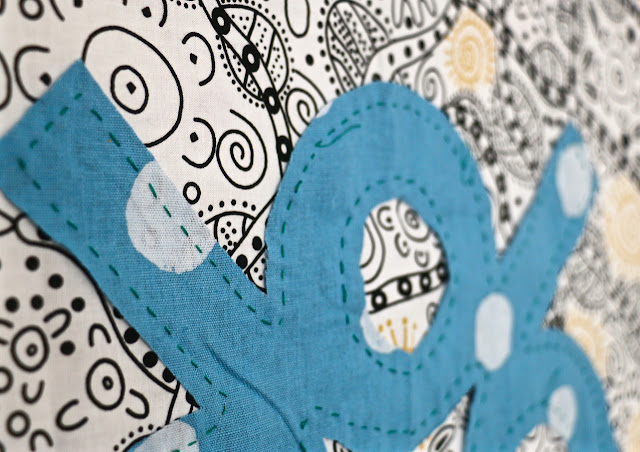 Run your stitches 1/4'' from the edge of the appliqué. Every single edge of the applique. If you aren't comfortable eyeballing the 1/4'' and have a marking pen you trust (that is, it comes out), mark the line first. I don't think this is necessary. And if you stray from the 1/4'' here are there, do not worry about it. This is a guide as much as it is a basting stitch, not a seam line.

This is the part that no one likes. It totally seems like overkill. Trust me, it isn't.

10. Machine basting seems like good idea. It does go quicker and you can easily get that 1/4'' line. But the stitches are way more difficult to remove. It might save you time up front but it more than doubles the time at the end. Plus, you still have pins while basting and they poke you even more. Unless you use glue, but that is another issue.

11. Glue. It seems like a good idea, but I hated it. You have to be very, very careful not to get any of it on the edges or else your fabric will not fold over. It also makes things stiffer. That isn't a big deal, but it reduces the tactile enjoyment of hand appliqué. Yes, that is a thing.

12. Remove your basting stitches. All those hand stitches add a really interesting element to your appliqué and it might be tempting to leave them in. Remember, however, that they are not knotted and therefore not permanent in the fabric. If you love them so much replace them with hand quilting. Hand stitching basting comes out so, so easily too.

13. Embrace the process. It takes time, no doubt. So does cutting out fabric, sewing it together, quilting, and binding. If hand basting feels like such a waste of time then maybe hand appliqué isn't for you either. This is slow stitching, it isn't meant for a quick turn around. So accept what it is, put on a movie, pour a cup of tea (or open a beer), and stretch your fingers.

As I said at the beginning, it is totally worth it to baste your appliqué this way.

First, your appliqué stays where you want it.

Second, and more importantly, the basting stitch acts as a guide for your appliqué stitches. The fabric folds under at the edge, to meet the stitches. This gives you a consistent seam allowance. That means your curves and corners go where they are supposed to in a smooth line. It is pretty much impossible to end up with points on the edge this way.

Taking the time to baste properly means your appliqué goes smoothly. And you can actually relax as you do it. Frankly, that's kind of the point, right?

I must give full credit to Carolyn Friedlander for converting me to this form of basting. She is an appliqué whiz and designs her appliqué patterns so well. If not for her I wouldn't be doing this hand work at all.

Posted by Cheryl Arkison at 3:26 PM

These are good points. But one thing I don't understand is, if you baste 1/4 inch away, how can you turn under 1/4 inch. Or do you turn a smaller allowance, like 1/8th?

thank you so much for your post on basting; all my appliques have seemed to shift--not that i have done q whole lot of them--but I will definitely try my next project using basting and needleturn (which has seemed to elude me ) Hugs, Julierose

I am enjoying learning Carolyn's approach to applique too.

You are so so right about this! I learned this while doing Hawaiian appliqué pillows and tried pinning because basting seemed such a waste of time! My appliqué shifted, I couldn't get a consistent turn under amount and I got blood spots all over from the constant pricking of my hands and fingers! It is so worth the time, and I use up spools of old thread in odd colors that I would probably never use again! And I believe another commenter asked, but 1/8 inch turnover is the amount usually used so the 1/4 inch basting gives a perfect quite!

I'm all in!
Except the part about machine basting being hard to remove - maybe it has to do with the types of shapes I tend to appliqué (read: not teeny or intricate) but I use a long stitch and low tension and have never had a problem. I've even been known to use a very sparing amount of gluestick in the centre of trickier appliqués (swallows, for example) to hold them for basting, and not had a problem with stiffness or stickiness.
But I will say that the process pledge only goes so far for me in the case of hand work, because I'm a chronic non-finisher and it irks me. So I'm not arguing that the fast way is better, only that it's better for me.

A good round-up/summary/reminder. Thanks Cheryl.

Thanks Cheryl. A really informative and thought provoking post. And I appreciate you tried out so many methods so I don't have to!

Have always basted my applique, just seemed to make sense in taking your time to do something properly, love my applique !

I would strongly love to recommend the services of the best team of dark web hackers. They are professional and very discreet in carrying out their jobs, they have the best customer service agents and satisfaction at heart. If you have any services you wish to contact them for, go on contact@wizardcharlesgrouphackers.com or wizardcharlesgrouphackers@gmail.com, WhatsApp +31 6 84990027, They help track and monitor your cheating partner's phone without his idea, clear or erase criminal records as well as repair a bad credit score, all social media hacks, Recovery lost Funds from scammers / Cryptocurrency / Binary / Forex / Recovery of Stolen Bitcoin and many others. website : https://wizardcharlesgrouphackers.com/.n/

We are offering all types of tools & Fullz on discounted price.
If you are in search of anything regarding fullz, tools, tutorials, Hack Pack, etc
Feel Free to contact