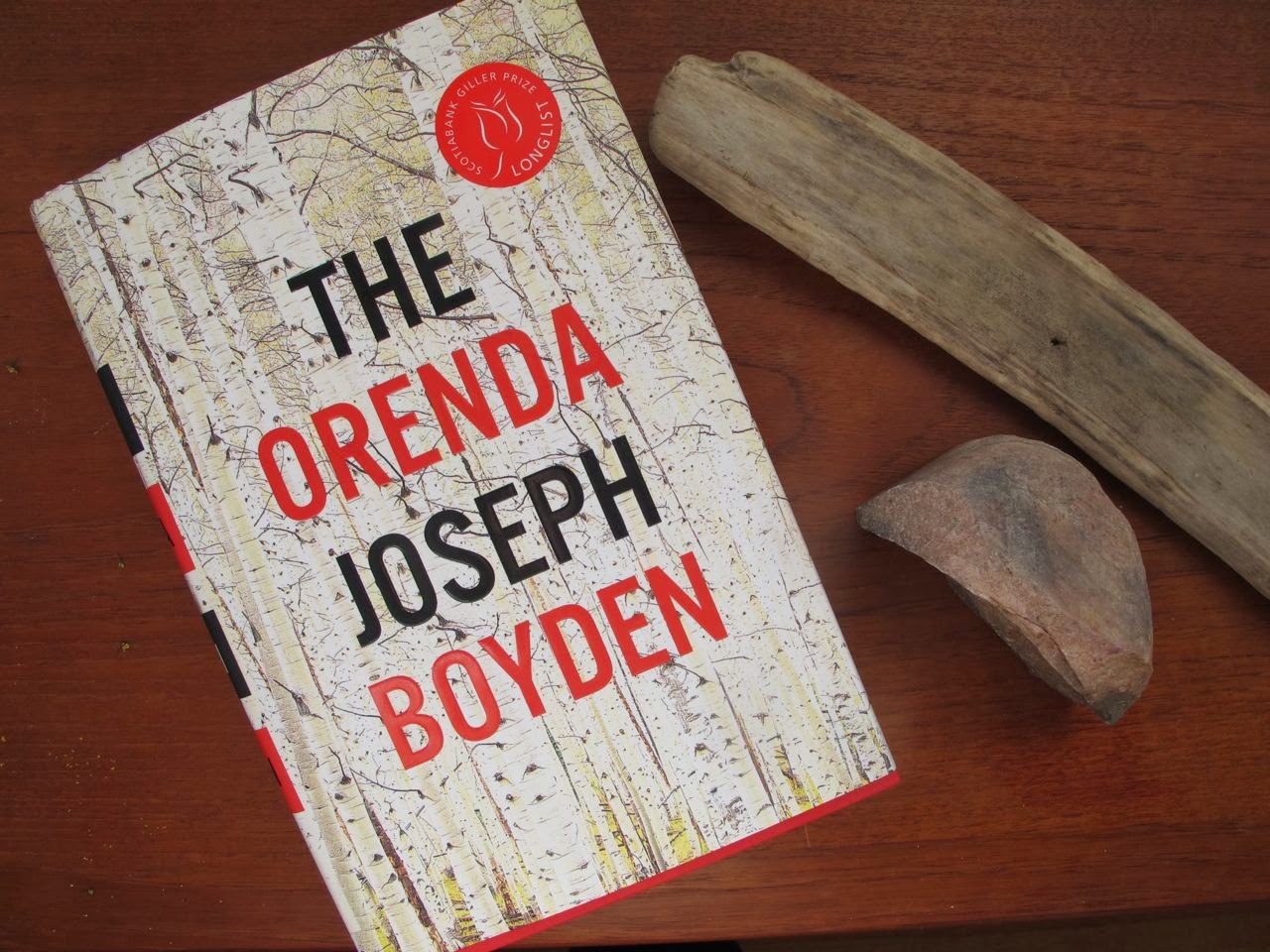 As a reader, one of my biggest pet peeves is when a novel peters out at the end. The story is trucking along and then what should be a climax is really just a pfft of storyline. And in two pages is wraps up and you are left wondering what the heck happened. Following quite closely is an ending that is a little too perfect, especially after the imperfections of a life in fiction.

The Orenda has neither. A brilliant story builds to a violent and fascinating climax, with little surprises that make you gasp. At the same time expectations are met and the story continues as it should. The ending fits, it just makes sense. And it made me not want to stop reading yet hug the book with the satisfaction of a well written novel read.

At first I struggled with the novel. It is told from the point of view of three different characters and it jumps between them every chapter. It's actually quite frustrating at the beginning. But once the story builds it ends up being the perfect structure for telling the story. The three main characters are Bird, a Huron warrior, a Jesuit priest named Christophe trying to convert souls, and Snow Falls, an Iroquois girl taken in by Bird after he kills her family. Being able to see events from all three perspectives ends up being exactly the way the story needs to be told. The parallels in the characters are both obvious and subtle and only truly reveal themselves in the latter half of the novel.

The story, beyond the one about survival, battle, and clanship, is rooted in the history of the Jesuits in Quebec and their ultimate role in the demise of the Huron nation. It is a story I know well, one I remember writing about in my youth, and the reason I have an anthropology undergraduate degree. It parallels the story told in the novel and movie, Black Robe, but it frankly does it so much better. Less about the history (albeit accurate from my memory), however, The Orenda is a masterpiece of storytelling.

Joseph Boyden is a Canadian author that captures so much of the spirit and struggle of our First Nations. Three Day Road is one of my top ten novels. He is clearly meticulous in his research and epic in his writing. He can capture the details of an event in a way that leads you into the space of the story and writes of the events in a way that make you breathless. Now, with The Orenda, he delivers a  tome destined to define a moment in time.

Currently up for Canada Reads, our national contest for the best book - this year focused on books that all Canadians should read. My vote definitely goes for The Orenda because even if you put aside the storytelling brilliance, it is a story that we all need to read. A moment in our past that is ugly, brutal, and defining of relationships in Canada (and in many other places of the world) between First Nations and the rest of us. And a reminder of the mistakes made, the hopes misguided, and the spirit of all.
Posted by Cheryl Arkison at 10:52 AM

I always appreciate your book reviews. My word for 2014 is read because I don't do it enough. Sadly I have fallen into the rhythm of blog reading and nut graphs. I'm hoping I can retrain my brain and my patience level to appreciate a well crafted story or novel once again.

Thanks Cheryl! I always appreciate a good book review and rec. Will check this out! And as an expat I love finding new-to-me Canadian authors too.

I added this book to my "hold list" at the local library (I live in Seattle). The library has 8 copies but has 8 more copies on order. This book reminds me of Black Robe, a movie by director Brian Beresford - the movie is based on a book which I never read. Movie came out in 1991 and I still remember it - beautiful, brutal and quite haunting. Also not for kids.

I loved this book! His other ones too but this one had me stuck in a chair just dying to find ways to avoid doing housework and making dinner for the family so I could keep reading. :). He is great...I heard him speak once and he just seems like such a good person who really cares. I'm rotting for him on Canada Reads too!
Heather