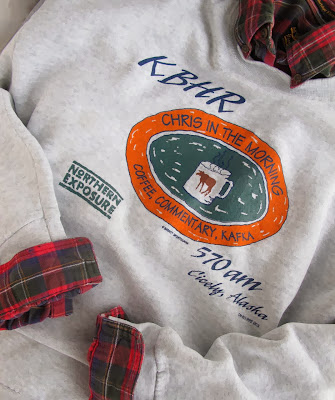 Let's just say that I graduated high school a long time ago. Back when Northern Exposure was about the most awesome TV show on the planet, followed closely by Twin Peaks. I have no idea where I found this sweatshirt back then, but I am so glad I did.

And yes, I still wear it. The flannel shirt too (It's even older - it was the early 90s, after all).

I have two seasons of the show on DVD and I wish I had them all (but with the original music). And iTunes doesn't have it, argh. If I had it then I could cozy up in my flannel and sweatshirt, cook up a moose meatloaf, and settle in for a long winter's watch. Or could someone at least record all of Chris' soliloquies and release it as a podcast?

Hah! We were just talking about Northern Exposure at a work Xmas party last night. I accidentally called it Northern Reflections (another obviously 90s reference, if you were in the market for a baby pink matching sweatsuit with rose appliques... ugh). I remember an interview with John Corbett at the time and he said something like, he doesn't even understand the words he's saying, he just memorizes his lines and sounds out the big words phonetically. Sigh. He broke my heart a little bit that day. :)

Northern Exposure was the best tv-show ever! Aaah, good times =)

Where is your sweatshirt, Cheryl?

We loved Northern Exposure in Australia too. I have season 1 and recently got season 2 from the library to watch again. I still love it.

I was a huge fan too.. and im a little older, i was in college! a northern exposure day would be awesome!

I have the whole set, it is one of my all time favourite shows. I think that if you look about you will find the whole set in the stores at Christmas. I will keep an eye out for you too. I love the shirt.

They have some of them on Netflicks. My hubby & I watched them a few years back. It was very nostalgic. SIGH!

I am so jealous of this shirt!! I love this show so much and every few years go thru viewing the 3 seasons I have. The DVDs have little parkas!

We must be just the same age! I remember wishing there was somebody like Chris on one of my local radio stations. : ) Now it annoys me to no end when I hear his voice on Walgreens and Applebees commercials.

Shhhhh we are all WAY to young to remember those shows! That's my story and I'm sticking to it! LOL

My husband and I were just talking about Northern Exposure! LOVED that show. I think it is awesome that you have that sweatshirt