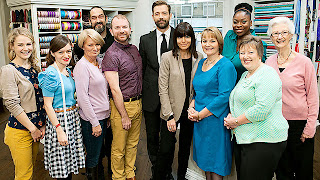 When you've got three kids you are very good at multitasking. You are also very good of milking every single second of any free time you've got. So when I was blessed with a unexpected afternoon off (school, playdate, long nap) I decided to sew and watch The Great British Sewing Bee. And it was awesome, all of it.

I worked on these blocks. And made it through 2 episodes. After the kids went to bed I watched the other two episodes. I was tired the next day, but so motivated. I started looking at dress and shirt patterns for myself. I want to sew clothes now. I've never wanted to sew clothes for myself. I hate sewing clothes and I don't know that much. But this show made it seem so interesting. And oddly, doable. I won't be making an evening gown, but I think I could tackle a simple dress.

The show is a reality show, let's be clear. But the Brits do these competition shows differently. The drama isn't there in the competition, just honesty from the contestants. And the judges are actually kind and not caricatures. If I was a man I would lust after the suits Patrick wears.

The best part? You can see all the episodes on you-tube for free! 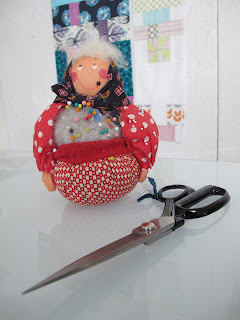 Deborah over at Whipstitch is getting ready to launch an e-course on dresses. This might be perfect timing for me as I definitely need someone to walk me through this. I envision my pincushion and good tailor's scissors are going to get quite the workout.

Posted by Cheryl Arkison at 8:08 AM

you have my curiosity peaked. off to check it out!

Thanks for sharing this info. Usually if it's not flat and rectangular I don't know how to sew it, lol! But sewing clothing might be an interesting diversion!

Just watched to episodes! A man's shirt in 4 hours?!>! Great fun to watch I wouldn't be able to handle the time constraints myself!

The series ended here in England a few weeks ago and, though I haven't made clothes since sewing lessons at school (a long time ago!), it made me want to try something. They are definitely making another series - yay! xCathy

I ended up watching all 4 episodes yesterday while preparing meals. Even D#2 got hooked. I thought the winner was well deserving.