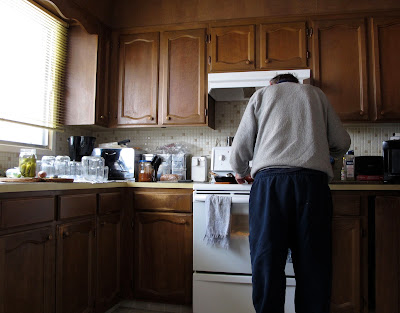 My Dad was world famous for his salsa. Well, locally famous. As in, all of our family and friends would beg for jars of his usually just the right amount of spicy and a bit smoky salsa. In a family such as ours it is no surprise that the recipe for pyrohy dough is a treasured possession. We'd be bad Ukrainians without it. But the salsa is what we all were afraid would get lost when he died.

As the end was becoming abundantly clear in my father's lung cancer we all gathered at my parent's house. I sat and spoke to my Dad about his salsa. We started with the first recipe, the first batch he ever made. He told me where he got his tomatoes and peppers. I photographed each ingredient as it was chopped so we would always know just how fine or chunky it should be. I photographed my Dad as he  stirred, sipped, and stammered through making salsa. 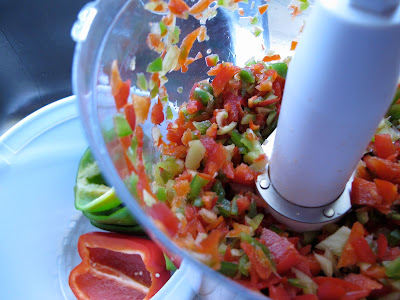 A week later he was admitted to the hospital and 6 weeks later he died.

Two weeks ago my Mom and I gathered to make a batch of salsa, only the second time we've done it since his death. Somehow it's fallen to me to be the guardian of the recipe. I don't mind at all. We do a good job with it, but of course it isn't the same. It lacks the smokiness - maybe that infiltrated from him and his nasty smoking habit. And I chopped things a bit finer this time because I wasn't paying as much attention. I could hear his criticism in my head as I stirred the peppers into the tomatoes. But we came out with jars and jars of salsa that we still call Dido's Salsa. I still top my scrambled eggs with it, my daughter fills her tortilla with it, it sits beside a plate of nachos when friends come over and they ask where we got it. It will always be Dido's Salsa, even when I chop the onions too fine. 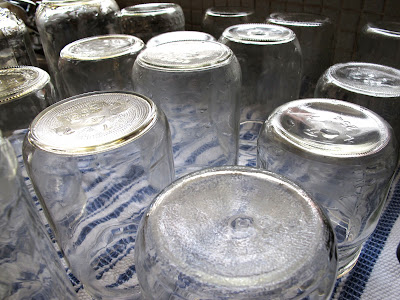 Today is the 2nd anniversary of his death. The 4 am phone call from my brother. The sobs of my Mom as I woke her, the stupid red car stuck in a giant puddle on the way to the hospital, making tea while I called the funeral home, telling the girls in the midst of a date, the washing machine repairman who came and had no clue what had happened. It's all so vivid. Perhaps even more so this year as last year I was focused on the new baby.

My Dad was a man with many faults and our relationship was far, far, from perfect or even good. But he had a story and a heart in there somewhere. And damn, he made fine salsa. 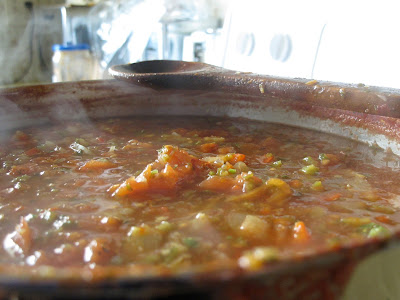 Posted by Cheryl Arkison at 8:04 AM

Such a touching post. Our parents are out parents. No relationship is perfect. My mom was diagnosed with lung cancer last fall. She is coping. But it has made me aware of things I deem special about her and how important it is to gather them up so I can remember fondly when her time comes. Thank you for such a heartfelt story.

So many special things that you take for granted as you are growing up, and remember so fondly now. I lost my mom almost 8 years ago, and the way you describe every detail you remember about that day - it is the same for me. I'm glad your dad left so many precious gifts for you to share and pass on. ((HUGS))

I am thinking of you and of your salsa and of my dad and all the other family that are no longer here. I am glad you have the recipe.

Family relationships are never anything but complex, and the emotions they evoke can be really difficult. Thinking of you, Cheryl.

Such a sweet post. I lost my dad many years ago and I am only now beginning to remember the really good things. He loved me and he was human and flawed. But he was my dad. And I loved him. I am more accepting of these things now, 40 years later, than I was at 16. Time mellows the edges of the memories until the good is what remains. Bless you Cheryl.

Family recipes, stories and tales are precious. Tell them as often as you can so that the kids know them and cherish them as well. Every batch of salsa I make comes out different. My dad doesn't know anything about life in the kitchen other than eating! hugs to you!

My heart goes out to you and your family. I lost my mom to lung cancer three years ago, and this third year has been just as hard as the first. Thanks for sharing your story, and reminding me to find and appreciate the good in my dad, although there many days when I never thought that would be possible. BTW, I love scrambled eggs with salsa - and homemade? Even better!

No one is perfect. Even when relationships are difficult, our parents are important. I am so glad you have salsa and with it his memory.

Seems like the most meaningful legacies are the ones that happen unintentionally. I'm glad you got to spend some salsa time with your Dad, and that you can carry this story forward for your children. Lots of love to you, Cheryl.

Thank you for sharing this post. I was especially drawn to your account because my grandmother was diagnosed with lung cancer this year. It is a new experience for all of us. I've had a crash course on the disease over the past six weeks. If you are willing to share more about your father's illness, I would be grateful to learn more about what to expect. You can connect with my at kmcassie at gmail DOT com

A lovely story, but sad sad. I lost my father just before Christmas. I can feel tears welling up when I think of his vegetable patch that won't be cultivated this year. It's the little things... Keep munching the memories. JJ

Thanks for writing this . . . I have a strained relationship with my Dad too. I make salsa every year from my garden tomatoes and peppers. Try roasting some of the peppers before you chop them and add them to the salsa for the smoky flavor, although you may be right about how your Dad's salsa got its smokiness.

This made me tear up. Maybe it was the onions from the salsa or something. Thanks for sharing something close to your heart. And the salsa looks pretty delicious too.

This was a beautiful post..Thanks for sharing your story.

Thanks for sharing your story and memories of your Dad. Food is like a memory trigger, in that eating a familiar dish will sometimes bring to mind a family member or friend who is gone.
When I lived in Mexico, one of my favorite places to eat also made the most incredible salsa. It was not crispy chopped vegetables, but was made from onions, tomatoes, garlic, and peppers that had been cooked on a grill over a wood fire and then cut up and mashed in a molcajete (huge mortar and pestle) and served hot to the table. Chips were provided along with a bowl of chopped avocado and lemon wedges. Oh man, smoky wonderfulness on a chip!

I just stumbled upon your blog. You'll be teaching a class that I just signed up for and thought I would google you. I lost my mum to lung cancer two years ago on March 19. Ours, also, was a tempestuous relationship. I empathize. All of that aside though - enjoy the Salsa and the memories of him teaching you how to make it "his way".

Good post, Cheryl. It rung the bell, that's for sure...

A post that is beautiful in its honesty. Thank you for that.

Thank you for sharing your family's story with all of us Cheryl, it was genuine, real, honest and compelling. xo

Ever hear of a product called liquid smoke? You might try adding a bit of it to the salsa. Lois