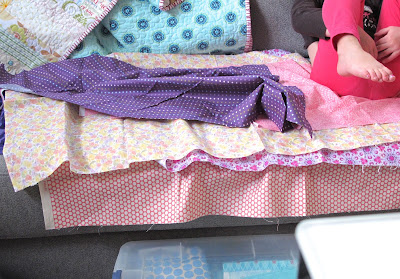 A couple of months ago my little girl asked if we could make a quilt together. We usually have quiet mornings together a few times a week when her brother is napping and her sister is in school. Personally, I think it was more about playing on the design wall than the finished project. And that's just fine.

She spent a happy morning pulling every single bin of mine out of the closet to pick fabrics. The only thing I encouraged her to do was perhaps select a favourite fabric to start or a colour combination. Being the little girl that she is, the pinks and purples came out first. At the beginning it was going to be all pink, then purple was allowed in. Then yellow, then some green, and finally red. I'm pretty sure this fabric play took her a few mornings.

Once she'd settled on her fabrics I set to cutting them for her. She specifically requested squares all mixed up. I went with 6 1/2'' squares simply because it was an easy size to cut. As I cut she placed them on the design wall. And then she'd go harass her brother, come back, and change a square. This went on for a few weeks.

Her first layout was all the same fabrics grouped together, with a random interloper breaking things up. I let her sit on this, then encouraged her to play. She was hesitant at first, but I took a picture of what she had and promised to return to that layout if she hated it after we played. But we never went back. 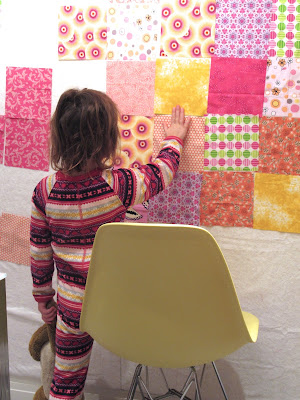 She would come in every morning and rearrange a few blocks. I snapped this photo when I realized her  PJs matched her quilt. So maybe she did have an inspiration after all?!

Then the blocks sat. I got busy with other projects and she had more playdates than quiet with Mama. I kept asking her to sew with me but she wanted to play catch instead. No amount of urging from me and pleas from her sister (who wants the design wall for her own quilt) could get her motivated.

With it being spring break this week and my need for the design wall I simply told her we were going to start. She didn't have to help, but I did sew a good portion of the quilt with her on my lap. 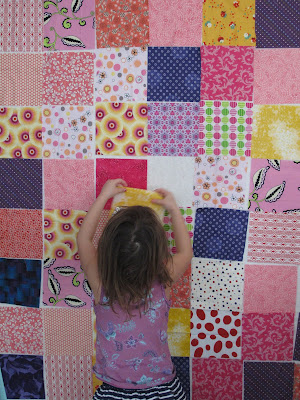 One last rearrangement before I took all the columns down and set to sewing. I changed nothing in her layout. Of course, as we were sewing she changed her mind on some blocks. So it ended up with a little more improv. The only thing I did was make sure we had no two blocks the same next to each other.

This has been a glorious experience for me. I've watched her excitement over the fabric and layout. She got such a kick out of making HER quilt layout just the right way. It took a lot of my energy to stand back and let it all happen. A lot. Sure, I did the heavy lifting, but this will most certainly be her quilt.

(The top is together and she's picked the backing fabric, but she asks that we wait for a big reveal!)
Posted by Cheryl Arkison at 11:49 AM

Hey M how to rope mom into spending time with you. YOur colour choices are great and I look forward to the big 'reveal"

what a special quilt it will be

How wonderful will these lasting memories be !~!

That's so great that your little one is wanting to make a quilt!

My 10 year old started designing quilt blocks last summer, she's got about 6 blocks sewn now too. I'm so proud of her, and I can completely relate to holding back!

Wonderful colours! Way to branch out beyond pink little one - it's hard to do! ( :
My own 2 year old is on the verge of this too- will take inspiration from this post of how to do the 'process' with her! Thanks- looking forward to the end product!!!

I love everything about this. My daughter just turned 1, my 1st, & I can't wait to do these things with her.

I think my favorite part of this whole thing is that she wants to have a big reveal! Great sense of showmanship ;-)

Oh, I loved reading this post. How very sweet and wise of you to let her take her time and let "her" quilt evolve. My daughter is now an adult, but even back then I don't think I would have been so patient or so free to let her do it her way. good for you.

This really warmed my heart. Thank you so much for sharing. :)