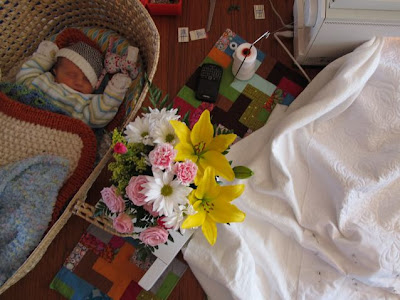 Has it been 2 weeks already?
We're still trying to figure out a new rhythm with Nikolai in the house. He's a pretty good baby, most of the time. His sisters are, of course, bursting with excitement. The realization that he sleeps a heck of a lot is finally sinking in though. As is the fact that they get nothing to do with feeding him until he is older. But they are very helpful and mostly entertaining.
The other morning I unexpectedly had only the little man home with me. He was sleeping and I was feeling rested. Mama decided to pull out the machine and quilt. It was only for an hour, but it felt great. And it was awesome that he was happily sleeping beside me on the dining room table. The Empire has truly expanded.
Now, about that book/baby poll. No one had both days correct. A few got the right baby or the right book date. (I even had the right baby date - I was hoping for the first day of spring and that's when he came!) But one person was awfully close.
Amy had the 5th for the book and the 19th for the baby. We got emails on the 5th saying that some folks had the book in their hands. And Nikolai was born only 4 hours into the 20th. I'd say Amy is the winner! I'll be sending out a book to you Amy.
Thanks to everyone for playing along and supporting me as I navigate this crazy time.
Posted by Cheryl Arkison at 8:24 PM

What a fun post...I can't believe you got the date right on his arrival! Otto was born on his due date...which was crazy since my other two were many, MANY days overdue.

What an adorable picture. I loved when my twins slept with those tiny hands next to their ears with socks on them to keep them warm! Glad you got a little quilting fix:)

That picture is loaded with goodness--Nikolai, flowers, quilts, color, the sewing machine...the list goes on.

Congratulations to Amy for guessing well. I am so glad that you and Nikolai found a temporary way to quilt together.

He sure is a cutey.

that is the sweetest photo ever. :-)

Two weeks already and they will continue to fly by- as I am sure since you already have other little ones. I seriously cannot get over how incredibly sweet and cute that picture is of your little one sleeping in the basket! My heart just melted! Congrats, again!

Congrats on finding some sewing time while your adorable babe slept beside you! That's great that he was born on the first day of spring! I have two spring babes myself and it's a beautiful time of year to enter the world.

so fun. hope you are enjoying some "quiet time."