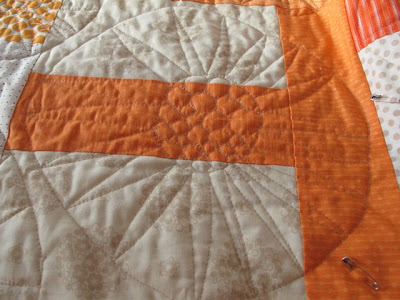 Ignore the fact that those aren't really circles. Or think of them as organic suns.
I'm so close to finishing up the quilting my To a T quilt. After taking the first machine quilting class from Ana Buzzalino I decided I needed to push myself a little. I doodled and doodled. Then I basted, hoping that process would force me to make a decision. I certainly had some time to think - basting took me a while with the belly in the way!
I was pinning on a block that has the gorgeous orange print, Moira, from Echo by Lotta Jansdotter when the inspiration hit. My sketch and my reality aren't actually all that close to the design on the print, but it is the idea. And Lotta's print doesn't have perfect circles either. 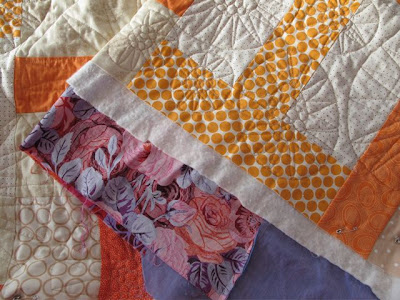 I'm using Aurifil 50wt thread to quilt this. A few weeks ago I won a pack of the Mark Lipinski Basics collection by Aurifil - lucky me! One of the beige threads was perfect. And it works fantastically with the purples I've put on the back.
Binding this week...
Posted by Cheryl Arkison at 6:31 AM

I think those suns are lovely!!! I hope you post a full shot if the quilt! I love organic quilting designs, perfect circles are for computerized quilting :)

I think they are beautiful!!

What a super MQing concept! What if...

Very nice! I am a new FMQer and I love it but it sure takes a lot of practice. Yours looks great! And I love the orange! ~Jeanne

Love the organic suns. Really fantastic! Book? How did I miss this fabulous news. Congratulations.

Looks great, Cheryl! (I didn't realize you changed your blog header/title; that looks great, too.)

It's so great that you pushed yourself out of your comfort zone and found the sunny spot.

I think they are looking good. I guess I could start stepping out of my comfort zone as well. Thanks for the motivation.

It's an remarkable paragraph for all the web users; they will get advantage from it I am sure.
Here is my blog ; www.daily-wet-tshirt.com