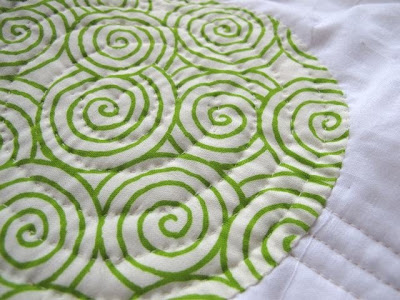 Handquilting is something I've tried a sum total of three times. The first time was on my third quilt ever. And only because I was terrified of free-motion quilting. The second and third times were earlier this year. That makes a 10 year break between efforts.
I'm trying it again. I would be talking out of my ass if I didn't confront my own fears after that last post on Fear. In my case, I was afraid that I would mess up this project with bad stitching. And the wealth of excellent examples on-line seriously intimidated me. But I can't sit around in fear, I just can't. It isn't my nature, although it is certainly easier. But I would be a hypocrite to you, my faithful readers, if I didn't challenge myself.
I would also be a hypocrite to my kids. You see, The Monster is a very intense child. If she can't do things perfectly the very first time she does something then the world essentially ends for her. Last summer, at 3, she tried her tricycle for the first time. When she couldn't figure out the notion of pedalling in the first 30 seconds she quite promptly got off the bike, picked it up, and threw it.
She gets that from me.
So, if I am working every day with her and her sister to get them to understand the notion of practice, work, and simply trying something even if you aren't perfect at it, then I need to do that myself. Enter handquilting.
Each of the 27 circles on my low-volume circles quilt will be handquilted. This is in contrast with the straight lines I'm doing on the background. It seemed an appropriate approach since the circles were done entirely by hand shortly after I injured my knees in January.
Now, I'm only three circles in. And it certainly isn't pretty. But each one looks progressively better. Seeing improvements certainly helps the confidence level. Regardless, I'm committed to the process and the product.
Full confession though, I'm stabbing these stitches, not using the traditional rocking motion. I know that isn't the correct way, but it is working for me. I believe that counts for a lot. Besides, on my recent trip to Nova Scotia I had the opportunity to snuggle by the fire under an incredible handstitched quilt that was entirely stab stitched. That was enough to motivate me to tackle my quilt. I don't know if I'll ever be as good as the artist, but I won't know if I don't try.
Posted by Cheryl Arkison at 2:24 PM

Well done you! I've practised a bit of hand quilting, but I'm building up to hand quilting an entire king size (hand pieced) hexagon quilt. i'm figuring that will take me well into winter...

good for you. your stitches will get smaller and more even over time, but handquilting is great because it is peaceful and because it creates great texture. I go hoopless and find I have better control, although I did take a class and perfected my rocking stitch.

Oh Cheryl, yes, yes, YES. Luv the idea of straight machine stitches and hand stitched circles. I'm way too impatient to hand quilt BUT, before I discovered that MQing was even an option I did hand quilt. I tried, I read, I studied. Then I stab stitched and found my groove. It IS a valid hand technique and don't let the quilt police tell you different. I'm seeing some really nice big stitch quilts that makes me want to take another 'stab' at it! ;>)

I live for hand quilting.
Screw perfection. My favorite quilts don't have even stitches. I mean wth is the sense of hand stitching if I'm trying to make it look machine quilted?
Even stitches come in time, with a rhythm. Small stitches, imo, don't matter, but those also come in time, with their own rhythm.
You're doing fantastic!

don't worry, I stab stitch too:) I've tried the rocking stitch many times, it just eludes me. My very first quilt was handquilted by my husband and I nearly 14 years ago. Entirely stab stitched and very uneven stitches. We loved that quilt to death.

Good for you! I love to hand quilt...actually, prefer it so I can take it with me. I do believe hand quilting gets more natural with practice...the rocking motion becomes second nature. Your stitching looks fantastic, though!

I think you are doing a great job, and are a wonderful example to your kids.

I started my first "real" quilt, which was meant to be for my eldest daughter, (an intense little girl herself) 13 years ago. I decided to entirely hand quilt it, putting little flowers in all the blocks, plus lots of diagonal lines and then a leafy vine for the boarder. I used a hoop and quilted tiny stitches with the rocking motion as I wanted everything to be the "right way". By the time I got into the boarder I was so sick of it I put it away, and it still sits, unfinished, on a closet shelf. Instead of aiming for perfection, I wish I had aimed for fun... maybe if I had, she would now be in her senior year of college with a not perfect, but well worn and much loved quilt made by her mother. Live and learn.

By the way, stab away! I no longer rock the needle, (or use a hoop) but instead do a sort of running stitch... seems to work just fine!

Good for you! My son is exactly like your daughter and he gets it from me so I relate. You are inspiring me to try something again. Knitting. I "hate" it but I think I secretly hate it because I'm not great at it.

Good news for you.. there is NO correct way!! Stabbing, rocking, frame, no frame... only the tedious can tell the difference

you go! (and watch out for carpel tunnel if you are prone... it's hell on the wrists... ask me how I know)

Way to go! I am also one of those people who wants/expects to do things perfectly the first time. This might be exactly the same reason that I haven't tried hand quilting.

Is it wrong that I just laughed my butt of at the image of your kid throwing her bike?

I was raised to think it is important to do things you are bad at. That's why I continue to play soccer. : )

Don't worry we won't send the quilting police to your house. The only right way to do it is the way that works for you.

Well done! You're braver than I!
Really, I don't have the TIME to sit and hand quilt... free-motion gets-R-done much faster :-) Maybe someday when kiddos are gone and I've got oodles of time. Until then, I'll live vicariously through you, if thats ok :-) haha

Hopefully by the end of the quilt, you'll love the satisfaction, results and the restfulness of handquilting! I use it as a guilty pleasure for wholecloths! (I machine quilt everything else) Oh, and the wadding (batting) can make a HUGE difference to a pleasurable experience or not. LOVE wool! Happy quilting!

Very interesting -- I've never done any hand quilting, and wasn't aware of the difference between "rocking" v "stabbing".... hmmm... anyone have any good links to share on the topic?

your stitches will get smaller and more even over time, but handquilting is great because it is peaceful and because it creates great texture.This is a very good work,I enjoy your post.

I stab stitched my first large quilt because I didn't know any other way. I say do what works for you!!!

That's handquilting? I had to go back and look at the photo again as i thought it was machine quilting (albeit i only took a quick look at first). Then you mentioned handquilting and I thought ??????? where??? YOu do yourself a disservice (sp?) if you think your progress is slow. Now I'm no expert but is looks pretty freakin' good to me. Looks good on ya girl

good for you for facing your hand quilting fears! it's funny, i just took a stab (ha!) at it myself again for my liberty scrap challenge piece over the weekend. i could get addicted! my stitches certainly aren't small. and i am not completely sure if i am hiding the knots properly. (i've had one pop already.) but i'm enjoying it!

your circles look great from here! keep up the good work!