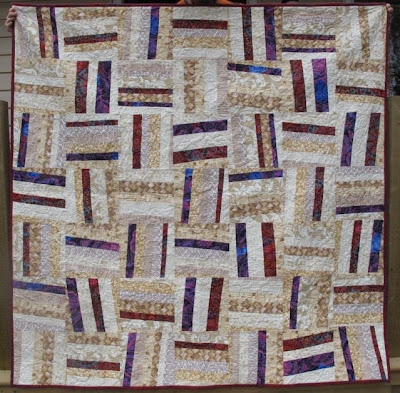 This is the first time I've shared a finished quilt with you that you didn't see anything of the process. I hope you aren't angry with me. I know, more than a little contradictory with the Workshop in Progress ideals. But I was testing the idea for a quilt along and wanted to be able to unveil it during the Blogger's Quilt Festival.
This is Gratitude (63 inches square).
Gratitude is for our neighbours. The neighbours who have saved our damn black dog during more than one thunderstorm - indeed, this is how we met them. The neighbours who always stop to say hi when they are out for an evening stroll. The neighbours who drew the plans for our basement and then refused payment for their work. And so we are giving them Gratitude. 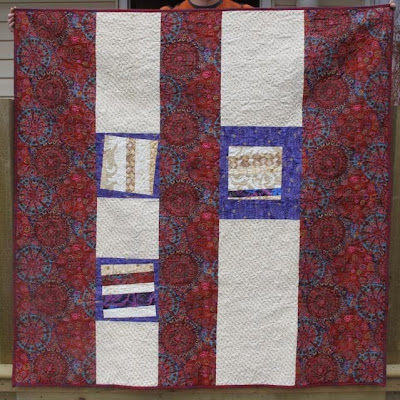 Said neighbours, B and M, live in a renovated house in our 50 year old neighbourhood. They've added on and opened up and it really is an homage to late 70s design. Parts of it may be dated, but I love their house. So the colours in this quilt are inspired by their house. They have rich red carpet, beige walls, and terra cotta and brick. It is a warm house that inspires creativity and friendship. They are lovely neighbours after all, and an architect and designer to boot. 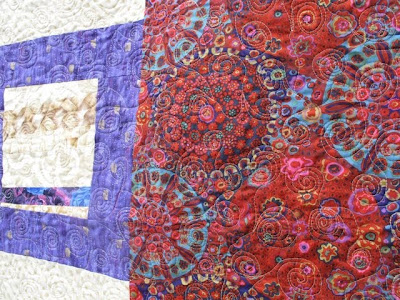 Victoria once asked her readers if there was any fabric that you wanted to buy on the bolt. I tend to get bored of a fabric, no matter how much I love it, after I've used it a few times. This red Kaffe, however, could change that. I did still see some at a LQS the other day and was tempted the buy the remaining yardage. I used it on the front as the red (along with another Kaffe in purple) and showcased it on the back.
You can also see the quilting on this photo. I did an all over swirl design, done free-motion. It was actually doodled from the scrollwork when I was in Banff. More hotel inspiration. I used my favourite thread, Presencia, in a cream colour. I actually wanted the quilting to be relatively subtle here, so as not to take away from the bold design of the top. I tried, but I couldn't just stipple it. I know there isn't anything wrong with stippling, but I wanted more. And more I got. As usual, it is heavily quilted. I swear, I don't mean to, but it seems I am unable to lightly quilt anything! 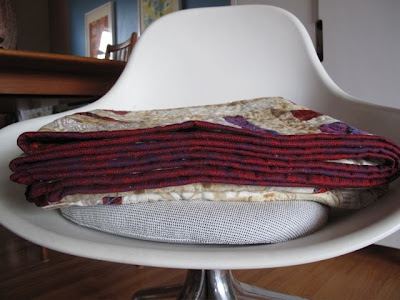 The binding was a lovely purple and red combo that matched so, so perfectly. I debated using a light brown so the red and purple on the top design popped a bit more, but when I found this fabric I knew it was meant to be. Funny, the LQS had it sitting right next to the Kaffe fabrics!
And finally, over a year after we received the plans from our neighbours and started the work to get the basement finished, here we are. Piles of concrete and wood. We've got the permits (renewed once already), picked the plumbing fixtures, and daydreamed about the master bath and quilt studio. But still it sits. (I took this photo today.) We're like the cobbler's kids with no shoes. Hubby works hard, the last thing he wants to do at the end of the day is put on the tools again. Sigh. At least I know that however overdue, Gratitude will be well-received. 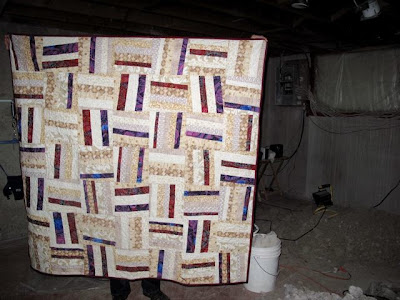 Thanks for visiting, old and new friends. I am indeed going to launch this design as a quilt along. It is very easy, trust me. Stay tuned, I will launch the quilt along with a discussion about sizing and fabric choices on October 21.
Posted by Cheryl Arkison at 3:04 PM

Lovely! Thanks for participating. :)

Cheryl! I love your Gratitude quilt! That Kaffe fabric is really cool looking. Thanks for sharing the story - your neighbors will cherish this gem you have created. And it was worth the wait :)

really a superb quilt and such wonderful sentiments sewn into it!
Thanks for sharing the story.

Your neighbors sound the kind that everyone should having living next door!!! I am sure they will love it. You put so much thought into the design. I love the red Kaffe fabric...especially next to the purple. I can't wait to see your quilt along design. Would love to participate!!! Thanks for showing and sharing.

what a great gift and so thoughtfully designed!

Beautiful quilt! I'm sure your neighbors will love it.

Anne at Film and Thread said...

Good neighbors are priceless and this is a beautiful quilt to show them that you appreciate them.

Hi Cheryl, great idea for a quilt along! And thanks for sharing the story behind the quilt. The Kaffe fabric is indeed gorgeous!

What a lovely gift for some very deserving people.

Oooh a very jaunty piece I would say. I like the pieced backing but I love that tulip looking chair you photographed it on!

What a thoughtful and endearing gift for the neighbors, who truly sound like a gift from GOD !
Blessings on your new basement......it'll come !

It's just beautiful. I'm sure they will treasure it.

Beautiful quilt and what a wonderful story behind it. Your neighbors sound like true dreamboats, and your quilt is a marvelous and generous gift to them!

Looks good lady! I have to say I love that red kaffe too. I used that on a couple quilts. It's a favorite...it has a great texture to it too. Happy thanksgiving!!!

Absolutely beautiful! I love the sense of movement. : )

It's really fantastic. they are a lucky people! I'm sure they will treasure it.

what a lovely gift...

I love the liberated look of your quilt. And what a wonderful thing for you to do for your neighbors. In this day and time we have to rely on others. I would not chose those colors but they work so well here. It makes me think maybe I am a bit hung up when it comes to color.

Love the quilt! I really like just a sprinkling of color with the beige and of course the wonky string blocks. Thanks for participating in the Fall Quilt Festival!

Amazing...gorgeous colours and perfect 'wonkiness.' Your neighbours will love it. Oh, and I'm all in for a quilt along!

I love anything wonky and this is so very cute. Your neighbours are going to love this. Gratitude is a perfect name for these talented people!

I love the simplicity of it! Your neighbor is going to love it!

I am looking forward to the Quilt-Along.

That is such a wonderful gift. Great colors and I'm looking forward to the quilt along. I wish I had neighbors like yours.

beautiful! I love the colors and the block design.

What a great gift. It looks wonderful, I love the quilting.

i loved reading the story behind the quilt. that quilting is so much better than stippling! :)

perfect neighbors and perfect quilt...Kaffe Fassett fabric is the best!

i think a quilt is the perfect thank you and loving gift to give. It is a great way to show appreciation! thanks for your story!

I keep coming back and gazing lovingly at this quilt.

And a good choice for a quilt along.

The quilt is beautiful. Your neighbors will be thrilled at such an wonderful unexpected gift. I am sure they will treasure it!

I love the quilt, is jumbled yet organized...and the reason behind it is even better :)
Very pretty

Good neighbors are an amazing blessing and I can think of no better way to express gratitude than to share our talents.

such an interesting quilt, and what a generous gift.
Kristina

That is a grat quilt for some great neighbours. I am sure they will love it. thank you for sharing your story :-)

Cheryl,
What a nice idea as acknowledgement of the gift of your neighbours. It is a lovely piece and I love the piece of red Kaffe fabric- I can see why you would want a bolt full.
Thanks for sharing.
Warmest regards,
Anna

this is such a great story. you have wonderful neighbors. this is a beautiful quilt

this story was inspiring. your neighbors are lovely and how lucky they are to receive such a gorgeous, abstract quilt. i really love that shot where it's posing with the modern chair :)

It's a gorgeous quilt.